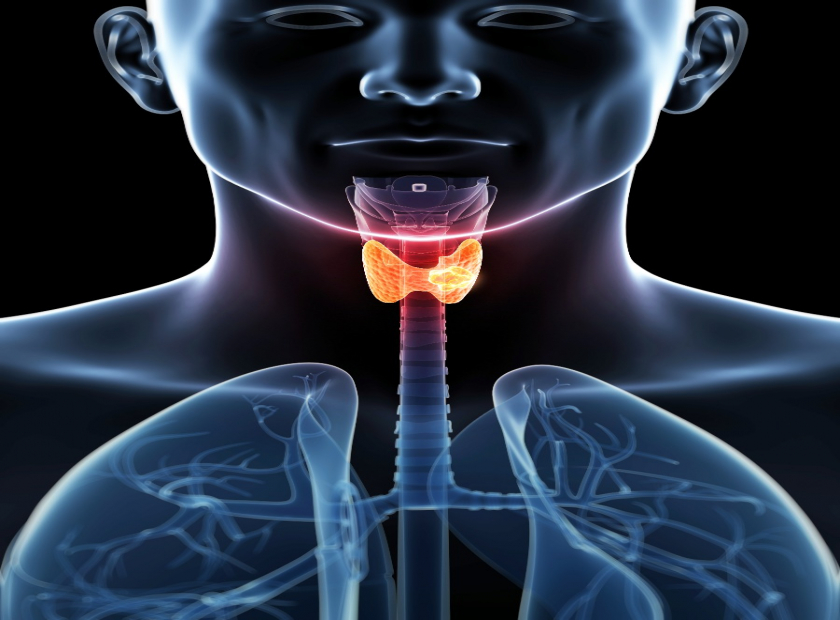 The thyroid is a butterfly-shaped endocrine gland that is approximately two inches long and is located at the front of your neck below your Adam's apple. The thyroid plays a major role in growth and metabolism by releasing the hormones thyroxine or T4 and triiodothyronine or T3, which regulate your body's ability to convert calories and oxygen into energy. The hypothalamus in your brain produces thyrotropin-releasing hormone or TRH, which stimulates the release of thyroid stimulating hormone or TSH from your pituitary gland. TSH then travels to your thyroid and prompts the release of T4 and T3 into your bloodstream. Under normal conditions, your thyroid produces approximately 80% T4 and 20% T3, with T3 being four times more potent than T4.

Every cell in your body has receptors for thyroid hormones affecting your cardiovascular system, bone metabolism, protein synthesis, body temperature regulation, cholesterol production, glucose metabolism, cognitive function, and your gastrointestinal tract. An estimated 20 million Americans have some form of thyroid disorder with women being impacted more often than men.

Hypothyroidism is the most common thyroid disorder characterized by fatigue, weight gain, constipation, hair loss, dry skin, cold intolerance, irregular menstruation, depression, muscle pain, and cognitive impairment. Hypothyroidism is an underactive thyroid gland producing an insufficient amount of hormones necessary for optimal metabolic function. The most common cause of hypothyroidism is Hashimoto's thyroiditis, which is an autoimmune disorder where the body produces antibodies that attack and destroy thyroid gland tissue.

Other causes of hypothyroidism include an iodine deficiency, a pituitary tumor, radiation therapy on your face, neck or chest, pregnancy and childbirth, the aging process, and an under conversion of T4 to T3 due to inflammation, stress, a selenium deficiency, and overexposure to fluoride, chlorine or mercury. If you're experiencing any of the symptoms of hypothyroidism, you should request that your family physician order blood tests that include thyroid stimulating hormone, free T4, free T3, reverse T3, and thyroid antibodies, if he or she suspects Hashimoto's. When interpreted correctly, lab results can help to determine the root cause of your thyroid dysfunction and the appropriate clinical interventions.

Unfortunately, reverse T3 is often excluded by physicians ordering lab tests for hypothyroidism because they mistakenly believe that reverse T3 is an inactive metabole with no physiological effect on the body. Not addressing reverse T3 has left many patients suffering from hypothyroidism, despite their other lab tests coming back within the normal ranges. However, reverse T3 does play a major role in metabolic function when your body's under extreme stress by acting as an emergency brake to conserve energy. Under normal conditions, T4 is converted into the more active T3 that binds to cellular receptors all throughout your body to exert powerful metabolic effects.

Reverse T3 is also produced to clear excess T4 from your body when not needed. But, when levels of reverse T3 rise too high, it blocks the uptake of active T3 by binding to cell receptors with the end result being a slowing of metabolism. According to the National Academy of Hypothyroidism, in a properly functioning thyroid, roughly 40% of T4 is changed to T3 and about 20% is translated into reverse T3 daily. However, if one's thyroid is malfunctioning or, if the body needs to conserve energy and is under significant stress, the conversion ratio may change to 50% of T4 becoming reverse T3. A significant change such as this greatly impacts thyroid function and hormone availability.

Individuals with normal levels of TSH, T4, and T3, but high levels of reverse T3, will still struggle with many of the symptoms of a slow metabolism such as weight gain, fatigue, depression, constipation, and chronic pain. In order to determine how T3 and reverse T3 are functioning at a cellular level, you have to calculate your free T3 to reverse T3 ratio by dividing the two numbers from your lab results.

For example, if your free T3 is 325, and your reverse T3 is 26, then you simply divide 325 by 26, which equals 12.5. A healthy T3 to reverse T3 ratio should be over 20. So 12.5 would indicate subclinical hypothyroidism. If a doctor prescribes synthetic thyroid medication, such as levothyroxine to a patient with subclinical hypothyroidism, it can exacerbate their condition because the T4 in the medication will continue to cause an elevation of reverse T3. The two steps required to reduce reverse T3 are as follows:

1. Remove all factors that are causing T4 to be converted into reverse T3.

2. Flush the remaining reverse T3 out of your system.

Factors that can cause the conversion of T4 into reverse T3 can include chronic illness such as diabetes, fibromyalgia, arthritis, and Lyme disease, low calorie diets or eating disorders such as anorexia, chronic inflammation such as autoimmune diseases, insulin-resistance or leptin-resistance, extreme exercise such as marathons, triathlons or heavy weightlifting, mental/emotional stress such as a loss of a job, divorce, death of a loved one, or PTSD, gastrointestinal infections or imbalances such as intestinal dysbiosis, irritable bowel syndrome, yeast overgrowth or candida, and certain drugs such as beta blockers, antidepressants, diabetic and antiseizure medications.

There are also various nutritional supplements that can help to support your thyroid gland and enhance the conversion of T4 into T3. The first supplement is iodine. Your body requires sufficient iodine in order to make thyroid hormones. In 2007, the World Health Organization estimated that 30% of the world's population is iodine deficient, putting infants born from mothers with hypothyroidism at risk for learning and developmental delays. The suggested intake of iodine is one to two milligrams per day.

The second supplement is selenium. The thyroid gland contains the most selenium by weight than any other bodily organ. Selenium is required to form the enzymes that facilitate the conversion of T4 into the active T3. As a powerful antioxidant, selenium also protects thyroid tissue from oxidative stress. The suggested intake for selenium is 200 to 400 micrograms per day.

The third supplement is zinc. Optimal zinc helps enhance the conversion of T4 into active T3, while at the same time lowering reverse T3. One study showed that, when patients with normal T4, low T3, and high reverse T3 were given zinc supplements for 12 months, their serum T3 levels normalized, and the reverse T3 decreased to healthy levels. The suggested intake for zinc is 30 to 60 milligrams per day.

Once your T4 conversion problem has been addressed, under the guidance of your physician, you can flush the excess reverse T3 out of your system with bioidentical T3 hormones such as Cytomel or compound and sustained release T3. Unlike T4, T3 is incapable of being converted into reverse T3, so as you slowly increase your T3 levels with medication, your T4 and reverse T3 levels will both naturally decrease.

Standard does of T3 medication are five to twenty-five micrograms daily on an empty stomach first thing in the morning. Be patient, because it can take approximately eight to twelve weeks to feel better as the reverse T3 is flushed out of your system. Side effects can include anxiety, heart palpitations, nausea, and headaches. So work with your physician to find the correct T3 dose for you. Once your reverse T3 levels

GET YOUR THYROID TESTS HERE