Effects of High or Low Estrogen in Men 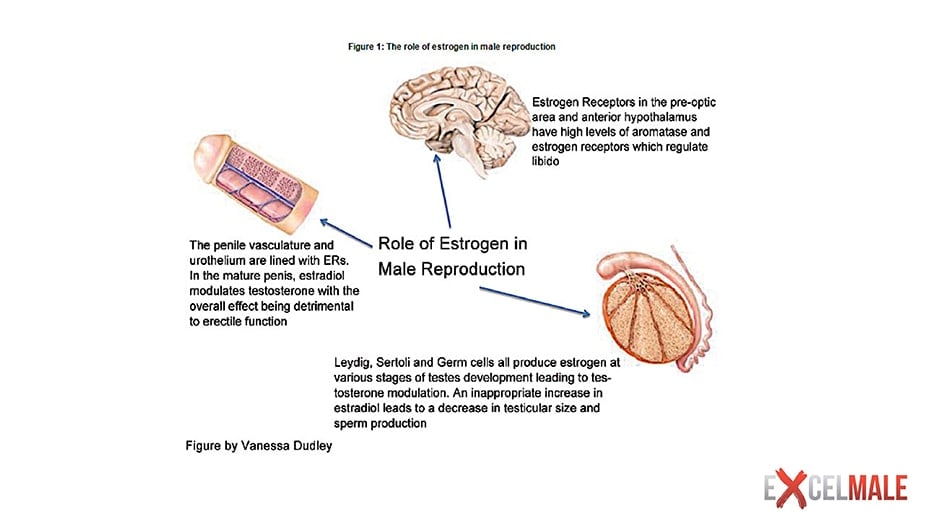 Why is Estradiol Important in Men?

Testosterone is the precursor hormone for estradiol. Estradiol  is a hormone more abundant in women than men that is produced by the aromatization of testosterone in liver, fat and other cells. Nature created it for a reason. It has been shown to be responsible for healthy bone density but its role in men's sex drive, body composition and other variables is source of great debate. One thing is certain: High estradiol blood levels can cause gynecomastia in the presence of low testosterone.

WATCH LECTURE ABOUT ESTRADIOL IN MEN BY CLICKING HERE

When the HPT  (Hypothalamic-Pituitary-Testicular) hormonal axis senses that testosterone or estradiol is high, it automatically decreases or shuts down testosterone production.

Many anti-aging or men's health clinics prescribe anastrozole, a blocker of estradiol production, to men who start testosterone replacement (TRT). Higher estradiol blood levels not only can cause breast tissue growth (gynecomastia) but also water retention (edema). Some people speculate that high estradiol can also lead to erectile dysfunction but no scientific papers have been published on this subject. Since higher testosterone blood levels can originate higher estradiol levels, the belief is that using anastrozole will prevent breast tissue growth and erectile dysfunction by lowering any potential increase in estradiol. However, we have no data on how high is too high when it comes to this hormone in men. Some even speculate that low testosterone-to-estradiol ratios may be more closely correlated to gynecomastia and erectile problems than estradiol alone.

The truth about these speculations is starting to emerge but we still do not have enough data to say what the upper value of the optimal range of estradiol really is. We have a lot of evidence about the lower side of the optimal range since it has been found that estradiol blood levels below 20 pg/ml can increase bone loss in men. A recently published study also nicely demonstrated that low estradiol can be associated with higher fat mass and lower sexual function in men. So, be very careful when a clinic wants to put you on this drug without first justifying its use.

Fortunately, most men on TRT do not develop gynecomastia even without using anastrozole (gynecomastia is more common in bodybuilders who may use high doses of testosterone and/or anabolic steroids, however). Those that have gynecomastia at TRT doses (100-200 mg of injectable testosterone or 5-10 grams of testosterone gel per day) may be genetically predisposed to having more aromatase activity or have liver dysfunction. Treating all men who start TRT with anastrozole from baseline may be counterproductive since this may lower estradiol to very low levels. Some physicians monitor estradiol blood levels after 6-8 weeks of TRT initiation (with no anastrozole) using the sensitive estradiol test to determine if anastrozole use is warranted. Doses range from 0.25 mg per week to some clinics using excessive doses of 1 mg three times per week. After 4-6 weeks on anastrozole, its dose can be adjusted to ensure than estradiol is not under 20 pg/ml. Fortunately, many men on TRT do not need anastrozole at all.

So we wait for more studies that will clarify the role and optimal ranges of estradiol. Here are a few studies that we already have available based on the role investigated.

THE ROLE ON ESTROGEN IN MEN:

From: The Decline of Androgen Levels in Elderly Men and Its Clinical and Therapeutic Implications


There is a rapidly growing body of evidence that a number of physiological actions of testosterone in men are mediated by the ERs (estrogen receptors) after its biotransformation by the aromatase P450 inhibitors in the tissues . Documented estrogen-mediated actions of testosterone in men include a role in the feedback regulation of LH , a role in the regulation of skeletal homeostasis , as well as a role in lipid metabolism and cardiovascular physiology ; among other possible estrogen actions in men, there are indications for a role in the brain and in spermatogenesis. These estrogenic actions in men can be exerted by blood-borne estrogens as well as through local aromatization of testosterone in, or in close vicinity of, the target cell. The expression of the CYP19 gene encoding the aromatase enzyme can be differentially regulated according to the tissue.

The conversion rate of testosterone to estradiol is around 0.2%. Up to 80% of plasma estradiol originates from aromatization of testosterone and androstenedione, mainly in subcutaneous fat and striated muscle, although aromatase activity is present in many other tissues, including bone and the brain; no more than 20% of estradiol in the circulation is secreted by the testes. Estradiol serum concentration in the adult male is around 20 to 30 pg/ml (70 to 110 pmol/liter), with a production rate of around 45 μg/d. Plasma estradiol is also bound to SHBG but with only half the affinity of testosterone. Total plasma estradiol levels in adult men do not vary significantly with age; indeed the decrease in precursor levels (i.e., testosterone and androstenedione) is compensated by an increase of fat mass and tissue aromatase activity with age. As a consequence of the age-associated increase in SHBG binding capacity, the serum concentrations of free estradiol and non-SHBG-bound or “bioavailable” estradiol do show a moderate age-associated decrease. It can be pointed out that estrogen serum levels in elderly males are higher than those in postmenopausal women.

THE EFFECT OF ESTRADIOL ON FAT MASS, SEX DRIVE, AND ERECTILE FUNCTION

There was a recently published groundbreaking study about the role of estradiol in men. No optimal ranges of estradiol were noted but low levels were associated with increased fat and decrease in sexual desire and erectile function compared to higher levels (the highest average estradiol was 35 pg/ml, unfortunately, so no conclusions can be made for levels above this).

Men had their hormones blocked by a gonadotropin-releasing hormone antagonist. All of them then received testosterone supplementation with Androgel. Half were also treated with anastrozole to block estradiol conversion from the testosterone.

All participants (Cohorts 1 and 2) received goserelin acetate (Zoladex, AstraZeneca), at a dose of 3.6 mg subcutaneously at weeks 0, 4, 8, and 12, to suppress endogenous gonadal steroids (testosterone and estradiol). All participants (Cohort 1 and 2) were then randomly assigned to receive 0 g (placebo), 1.25 g, 2.5 g, 5 g, or 10 g of a topical 1% testosterone gel (AndroGel, Abbott Laboratories) daily for 16 weeks. Participants in cohort 2 also received anastrozole (Arimidex, AstraZeneca) at a dose of 1 mg daily to block the aromatization of testosterone to estrogen. Participants were unaware of the study group assignments.

Low blood level of estradiol was associated with significant increases in the percentage of body fat (P<0.001), subcutaneous fat area (P<0.001), and intra abdominal fat area (P = 0.002), and relative less improvement in sexual desire (P<0.001) and erectile function (P = 0.022). These findings provide additional evidence of an independent effect of estradiol on these variables.

"Our finding that estrogens have a fundamental role in the regulation of body fat and sexual function, coupled with evidence from prior studies of the crucial role of estrogen in bone metabolism, indicates that estrogen deficiency is largely responsible for some of the key consequences of male hypogonadism and suggests that measuring estradiol might be helpful in assessing the risk of sexual dysfunction, bone loss, or fat accumulation in men with hypogonadism. For example, in men with serum testosterone levels of 200 to 400 ng per deciliter, sexual desire scores decreased by 13% if estradiol levels were 10 pg per milliliter or more and by 31% if estradiol levels were below 10 pg per milliliter. "

EFFECT OF ESTRADIOL ON MORTALITY IN MEN:

Androgen deficiency is common in men with chronic heart failure (HF) and is associated with increased morbidity and mortality. Estrogens are formed by the aromatization of androgens; therefore, abnormal estrogen metabolism would be anticipated in HF.

To examine the relationship between serum concentration of estradiol and mortality in men with chronic HF and reduced left ventricular ejection fraction (LVEF).

Quintile 3 was considered prospectively as the reference group.

THE EFFECT OF ESTRADIOL ON BONE DENSITY IN MEN:

This study followed young and older men's testosterone and estradiol to see their impact on bone density. Estradiol below 11 pg/ml was associated with increased bone loss.

Relationship of Serum Sex Steroid Levels to Longitudinal Changes in Bone Density in Young Versus Elderly Men.
The Journal of Clinical Endocrinology & Metabolism August 1, 2001 vol. 86 no. 83555-3561

I have been warning men and clinics not to be so aggressive treating estradiol in men with the overuse of anastrozole. Here is a recent study was done in Houston.

In a study of 423 men on TRT, Ranjith Ramasamy, MD, working with Larry Lipshultz, MD, at the Baylor College of Medicine in Houston, measured subjects' testosterone and estradiol levels and asked the men to rate the quality of their libido using a five-point Likert scale (1= terrible, 5 = excellent). The researchers categorized the men as having low or high testosterone (below or above 300 ng/dL, respectively) and low or high estradiol (below 5 and above 5 ng/dL (50 pg/mL), respectively).

Men with high serum testosterone levels reported significantly greater libido than men with low level and those with high serum estradiol levels had significantly greater libido than subjects with low levels. In all, 60.4% of men with both high testosterone and estradiol levels reported very good or excellent libido (score as 4 or 5) compared with 31.3% of participants with both low testosterone and estradiol levels, the researchers reported in European Urology (published online ahead of print). These results are expected to be presented at the American Urological Association annual meeting in Orlando.

Testosterone replacement improves quality of life and is aromatized in men in adipose tissues to estrogen. Hyperestrogenism is believed to be harmful to male sexuality. This is a description of our experience of screening 34,016 men in the Low T Centers, of which approximately 50% were converted to treatment. Men were treated with injectable testosterone, and we have available data from 2009 to 2014. The data were extracted from our electronic health record (AdvancedMD) of 35 Low T Centers across the United States. In all, 7,215 (20.2%) out of the 34,016 patients had high estradiol levels defined as ≥42.6 pg/ml. Estradiol was measured using electro-chemiluminescence immunoassay. Of the patients who had high estradiol levels, the age distribution was as follows: 132/989 (13.3%) were older than 65 years, 3,753/16,955 (22.1%) were between 45 and 65 years; 2,968/15,857 (18.7%) were between 25 and 44 years, 7/215 (3.3%) were younger than 25 years. The difference between extreme age groups (<25 and ≥65) was statistically significant using a chi-square test (p = .013). The correlation coefficient of serum estradiol to age was .53,SD = 8.21. It was observed that practitioners used aromatase inhibitor and selective estrogen receptor modulator to treat symptoms of hyperestrogenism, irrespective of blood estradiol levels. Gynecomastia was rarely documented as a reason for the prescription. Our finding was that high estradiol levels were not associated with higher rates of low libido but established higher rates of documented low libido with those with normal or lower estradiol levels. The difference was statistically significant (p< .05).

THE EFFECT OF LOW ESTRADIOL ON BONE DENSITY IN MEN:

Here is a more detailed discussion on estradiol in men: Click here

How to Get a sensitive estradiol test