Thyroid Tests and What They Mean: Thyroid Hormone Charts

With so many different symptoms and so many different organ systems potentially affected by thyroid system dysfunction, one might think that a diagnosis would be easy. However, in spite of the available blood tests for thyroid/pituitary/liver/adrenal function, the diagnosis is often missed. One of the most common misconceptions regarding thyroid function is the assumption that any reliance on the requirement that the diagnosis of hypothyroidism depends on an elevated TSH level. Normally, the pituitary gland will secrete Thyroid stimulating hormone (hence TSH) in response to a low circulating thyroid hormone level. 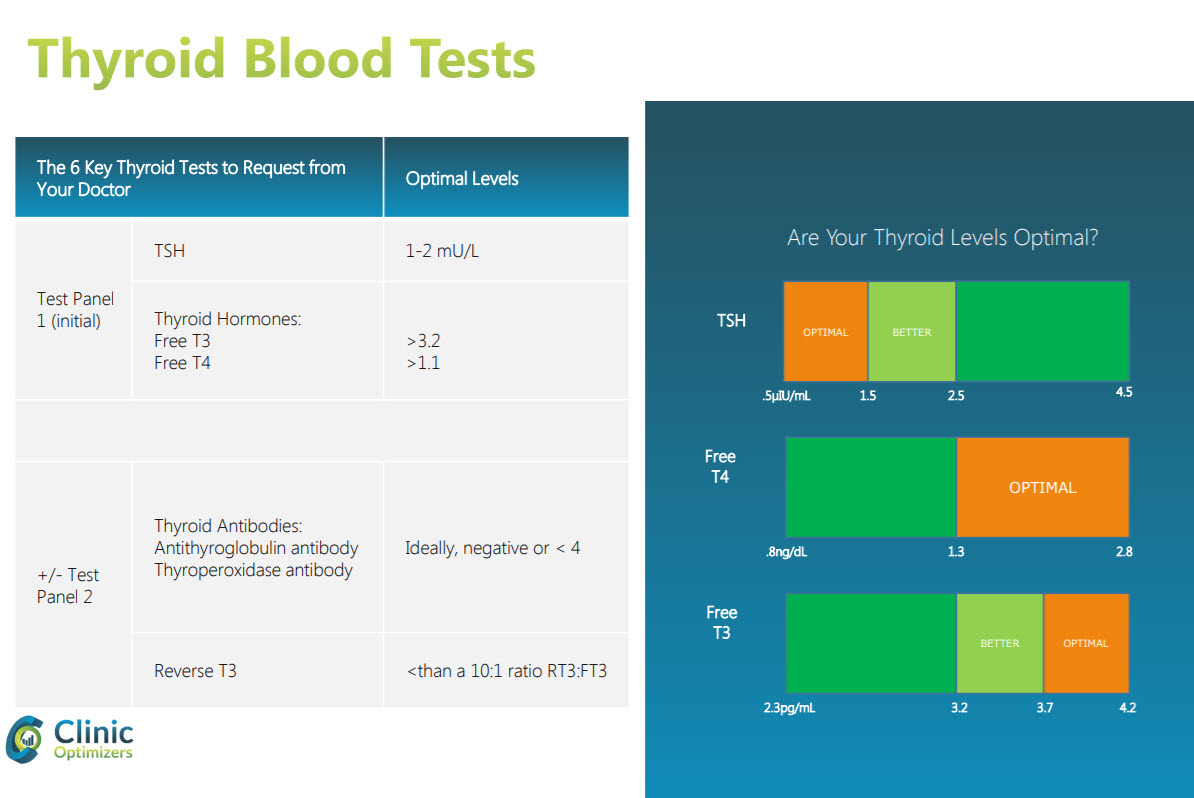 This is thought to reflect the pituitary's sensing of inadequate thyroid hormone levels in the blood that would be consistent with hypothyroidism. There is no question that an elevated TSH can confirm the diagnosis of hypothyroidism, but it is far too insensitive a measure, in other words, the vast majority of patients who have hypothyroidism do not have an elevated TSH level. Some have suggested that perhaps the upper limit of what is considered normal is too high, instead of the normal TSH range being from 1.0-4.5, the range of normal for TSH should be 0.5-1.5. In that way, more patients would be considered hypothyroid.

Furthermore, the lab level of TSH tends to vary throughout different times during the day making it less useful to rely on as the average level. MSG (monosodium glutamate) and stress tend to lower the TSH level, for example.

The most commonly used tests of thyroid hormone levels (note that I use the term level rather than function because the two are not always equal) are the T4 (or total T4), T3-uptake, FTI (also called the T7 or Free Thyroxine Index), and total T3 (sometimes called the T3-by-RIA). These tests are also unreliable because they do not reflect the hormone level that is actually available for action. Only the free T4 and free T3 are available to act on the cells. The total T4 and total T3 (as is most commonly measured) is a mixture of protein-bound T4 and T3 (and therefore not available to the cells) and the free T4 and T3. A large percentage of patients have low levels of the free T4 and free T3 even when all the other more commonly used tests are normal. Complicating the problem is the fact that these symptoms may present themselves while all the usual blood tests (TSH, FI, Total T3, etc) appear to be normal. When patients with Free T4 and Free T3 hormone levels below normal with or without an elevated TSH are given appropriate therapy, many report a tremendous improvement in the symptoms classically associated with hypothyroidism. Even when the lab work does not indicate low thyroid levels, many patients appear to fit the profile for low thyroid action. In fact, many of the best thyroidologists use the response to therapy as the major determinant of whether or not the patient was in fact hypothyroid. The diagnosis was confirmed by the response to the proper therapy. Even many of the most prestigious textbooks validate this approach.