Pregnenolone for Men: What We Need to Know 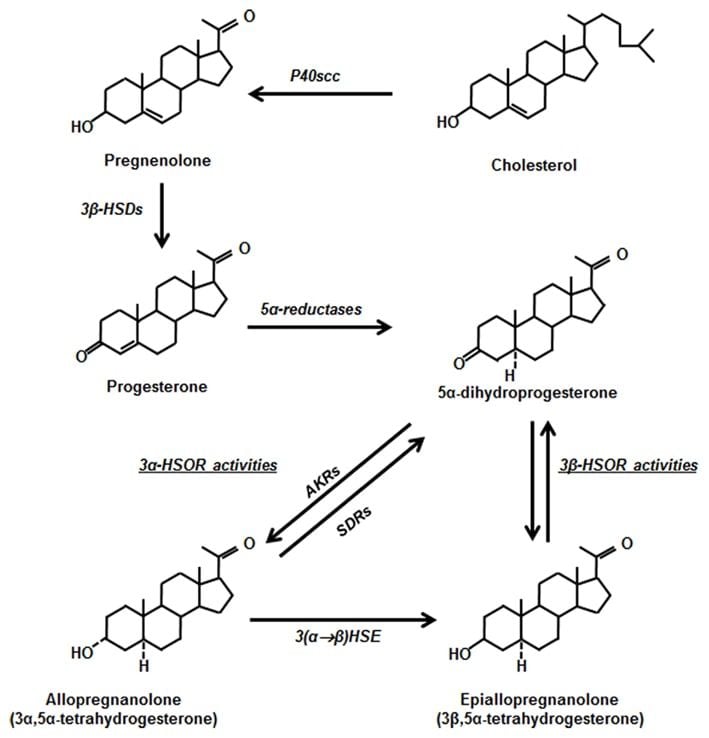 You could almost say pregnenolone is the "father" of all hormones!

Your body produces hormones from cholesterol, the sterol lipid molecule synthesized in our liver. But your body has to go through a process in order to produce hormones like testosterone, estrogen, DHT, and so on. First, it has to turn the cholesterol into pregnenolone. From there, it can produce hormones like progesterone (which is where cortisol comes from) and DHEA (which is needed for the production of testosterone).

But that first step (turning cholesterol into pregnenolone) is the most important step. Pregnenolone is essentially the precursor to these other hormones, as you'll see on the chart below:

What Can Pregnenolone Do?

As mentioned above, pregnenolone is the primary precursor hormone from which all other hormones are produced. However, it serves a number of important functions in the human body:

Alleviate Arthritis -- Arthritis is a swelling of the cartilage around the joints as a means of protecting the joints from damage. The cartilage has been worn away (either through use or as the result of an autoimmune disorder), so the joints swell up to prevent the bones from rubbing against each other. This inflammation can be both painful and limiting in terms of mobility.

So how can pregnenolone help? One study found that rheumatoid arthritis (an autoimmune disorder) increased their mobility and reduced pain thanks to pregnenolone. Daily injections of pregnenolone over four weeks provided "dramatic" improvements, even in one patient who had proven unresponsive to traditional arthritis medications.

The hormone also promotes the production of new neurons, improving your brain's ability to communicate with every part of your body. Pregnenolone also helps to regulate GABA, a neurotransmitter that promotes sleep, relaxation, and a proper chemical balance in the brain.

Thanks to pregnenolone, your brain will work better for longer!

Eliminate Excess Cholesterol -- While cholesterol is very important for the production of hormones, too much cholesterol can be a VERY bad thing. The cholesterol floats around in your bloodstream, sticks to the walls of your arteries, and hardens. The hardened cholesterol (plaque) is inflexible and stiff, so an increase in blood pressure can cause cracks in the plaque--potentially in the arterial walls as well. This can lead to heart attacks, strokes, and peripheral arterial disease. Excess cholesterol can also cause the arteries to narrow, reducing blood flow while increasing the strain on your heart.

Counteract Stress and Fatigue -- Stress is one of the contributing factors in upwards of 80% of diseases, so you can understand why it's so important to keep stress under control. Psychologists have discovered that pregnenolone helps to improve the brain's performance even when under stress. The hormone can make it easier to remember important details and complete difficult tasks even in stressful, high-pressure situations. Not only that, but it will help to enhance your overall well-being during periods of high stress.

The effects don't stop there! The hormone can help to decrease the output of adrenal hormones, which will in turn help to counteract the fatigue resulting from increased adrenal hormone production. In one study, just 50 mg of pregnenolone per day was enough to enhance performance and reduce fatigue, all with ZERO negative side effects.

Combat Depression -- Depression is a lot more common than you might think! According to the Anxiety and Depression Association of America, roughly 18% of the U.S. population suffers from depression. That's over 40 million adults over the age of 18 dealing with emotional disorders like clinical depression.

Studies have indicated that people who suffer from depression often have abnormally low levels of pregnenolone. One specific study found that pregnenolone could help to treat and possibly even prevent depression. 80 adults with Bipolar Disorder received either pregnenolone or a placebo for 12 weeks, and the depression remission rates among the pregnenolone group was almost TWICE that of the placebo group--61% compared to 37%!

The effects of pregnenolone on depression may not be limited to those with bipolar disorder. While this study looked at the benefits of the hormone specifically for BPD, further research may prove that pregnenolone could help to combat all forms of depression.

Enhance Thyroid Function --Your thyroid gland produces the T3 and T4 hormones, both of which are vital for a healthy body. People with hypothyroidism tend to have lower levels of not only pregnenolone but also DHEA. Taking pregnenolone supplements may help to increase the production of DHEA and combat the reduction in thyroid function.

Boost Central Nervous Function -- A number of people using the hormone supplement have reported noticing a significant difference in their central nervous system function. The pregnenolone supplementation has produced a feeling of "enhanced wellbeing" and "high energy" similar to those produced by DHEA supplements, and some have even reported seeing colors "clearer and sharper" as a result of the hormone.

Of course, this benefit is highly subjective. Not everyone will experience the enhancement to their central nervous system resulting from the pregnenolone supplements. However, it is one of the benefits commonly mentioned.

Boosted Libido -- The fact that pregnenolone is the precursor hormone means that it will increase the production of ALL the hormones in the body. This could lead to a boost in sex hormones--testosterone and DHT among them. Many people taking pregnenolone have reported an enhanced sex drive and libido, the result of the increase in male sex hormone production.

If your goal is to improve your sex drive, pregnenolone may be a good option to consider.

As you can see from the long list of benefits above, pregnenolone is a very important hormone!

However, there is a problem…

Aside from the natural decrease in pregnenolone that occurs as you age, research shows that higher doses of Testosterone Replacement Therapy (TRT) cause pregnenolone blood test levels to drop even further. This leads to a decrease in both DHEA and sex- hormone binding globulin (SHBG), two very important hormones for sexual health and libido. The decrease can be as high as 80 or 90%!

However, there is a simple solution: add HCG to your supplementation.

If you are considering undergoing TRT and are worried about your precursor hormone levels, adding HCG into the mix will help to keep your pregnenolone, progesterone, and DHEA levels consistent. HCG is a luteinizing hormone analog, and it activates the enzyme that turns cholesterol into pregnenolone. This ensures that your body gets the pregnenolone it needs to produce all the other important hormones.

Now, as with any hormone, there are a number of drawbacks of pregnenolone supplementation. Not everyone will experience side effects, but most users report one or more of the following:

Bloating -- Many pregnenolone users have reported feeling bloated and puffy with regular use, even when taking the hormone in tandem with DHEA or other steroid hormones. This may be due to the fact that pregnenolone increases the production of ALL sex hormones, including estradiol (the precursor to estrogen). An increase in estrogen can increase water retention, leading to bloating.

High Estrogen Levels -- As mentioned above, pregnenolone is turned into a lot of different sex hormones, including various forms of estradiol. This increase in estradiol can cause your estrogen levels to rise.

Strange Dreams -- A number of people taking pregnenolone have reported vivid, strange dreams after taking the supplement. While pregnenolone can help to reduce anxiety and stress (as we saw above), it has been known to cause your brain to be over-active when you sleep and may lead to odd dreams.

Other Side Effects -- According to WebMD "There isn't enough information to know if pregnenolone is safe when taken by mouth." However, it has been known to cause effects similar to those resulting from other steroid hormones: arrhythmia, hair loss, facial hair growth, headaches, negative mood changes, acne, anger, anxiety, irritability, and insomnia. For those with hormone-sensitive conditions (like breast, ovarian, or uterine cancer, or endometriosis), the hormone may increase health problems thanks to the fact that pregnenolone increases the production of estrogen.

However, the truth is that these drawbacks are really fairly minimal. For the most part, pregnenolone is a fairly safe option with limited side effects. However, it's important that you understand what you're getting into when taking pregnenolone.

How Much Do You Need?

If you are considering taking to increase natural hormone production, it's vital that you know HOW MUCH to take. The last thing you want is to overdo it and end up suffering the negative side effects!

According to the experts, the optimal levels of serum pregnenolone is 180 ng/dL. If your pregnenolone is below those levels, you can look into supplements. If your levels are around that number, you may not need to take pregnenolone.

The typical dose of pregnenolone is between 50 and 200 mg per day, usually taken first thing in the morning. The pills are meant to be taken on an empty stomach, or you can use a cream (transdermal application).

However, you may want to consult with your endocrinologist before taking any pregnenolone. They may recommend a higher or lower dosage according to your pregnenolone levels, or they may counsel you against it. It's essential that you get the recommendation from a medical professional before you undergo any sort of supplement, especially hormones like pregnenolone.