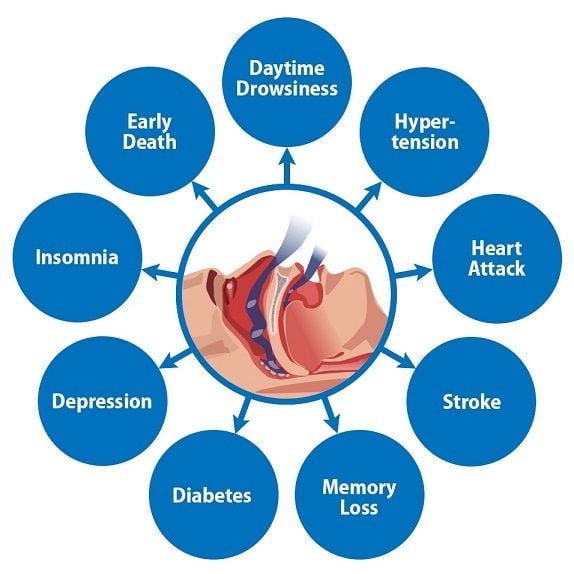 Do you snore? Do you feel fatigued every day? Do you wake up frequently throughout the night? It may be that the shallow breathing or breaks in breathing caused by sleep apnea are the reason. There are different types of sleep apnea, one of which is obstructed sleep apnea (or OSA), which is when breathing is interrupted by a physical block to airflow. With OSA, snoring is common.

What does apnea have to do with testosterone?  Everything!  Your precious shuteye is responsible for a host of all-important physiological functions, including rebuilding your testosterone and neurotransmitters, optimizing stress hormones, and mapping memory. Therefore, any condition, such as apnea that lowers the quality or quantity of sleep, is a physical and hormonal train wreck waiting to happen.

Apnea is one of the nastiest sleep disorders because it is so disruptive.  After all, what could interfere with sleep more than having your airways and oxygen blocked off? Unfortunately, one study after another has rolled out showing how complex apnea is on the body, and hormones are no exception.

One early study looked at just how severe the damage can be and found that apnea sufferers went from an average low testosterone test of 391ng/dL to a much closer-to-normal 487ng/dL after corrective surgery. [1] That's a jump of 25% in testosterone after their apnea was corrected!  However, a later study of guys in their 40's, showed an astonishing 68% difference between controls and males with apnea. [2] Regardless of the exact number, you get the idea:  apnea is devastating to your most precious hormone, testosterone.

However, there is actually a logical explanation for the difference in the two numbers above:  the first number comes from a comparison after apnea correction and the second before correction.  Researchers have found that guys who have had apnea for a significant amount of time are often overweight, even obese. [3]    In other words, if you've built up a big spare tire during your sufferings with apnea, CPAP or other therapy cannot get you back to where you were before because your own body is fighting against itself.

The researchers found that apnea subjects appeared more like aged subjects where LH (Luteinizing Hormone) cycles at night were increased, yet without a corresponding increase in testosterone as is experienced by younger males.  Young guys get a pulse of luteinizing hormone followed by one of testosterone and so on.  This cycle is dampened increasingly in males as they age, and apnea appears to accelerate this process.

In other words, once you get your apnea corrected, you must take care to also lose any excess weight in order to re-optimize your testosterone as much as possible.  The good news is that just getting treated for apnea will give you a nice jump in testosterone, and then as you lose weight and control cortisol, you should increase it even further.  Studies have even verified this in obese men with a BMI of 32, which isn't what would even called obese, by the way.  When they lost weight, they regained their testosterone. [4]

Similarly, apnea also leads to elevated cortisol level.  One study found that subjects had 50% percent higher cortisol before CPAP when compared to after. [6] This is truly nasty:  cortisol is not something you want to be elevated by even the smallest amount.  Higher cortisol elevations, especially in the middle age and beyond years, can lead to memory damage, lowered testosterone, increased fat mass, lower immunity, poor sleep and a host of other ills.   In the last ten years, researchers have uncovered the fact that most apnea is actually lifestyle-related and not simple genetics or aging.

Sleep apnea has been shown to increase the incidence of these health problems:

One interesting aspect of apnea research is that researchers are finding that there are many natural solutions that can often help apnea sufferers and sometimes even cure their apnea.  This is important for several reasons.  First of all, in some cases, it shows that there is a root cause of apnea, i.e., there is not some inherent genetic weakness causing this debilitating condition but rather some lifestyle change that can help significantly.  Secondly, the medical solutions for apnea are rather invasive:  surgery (somnoplasty and snoreplasties) and/or a cumbersome CPAP machine worn through the night.  Many of those with apnea would like to avoid such solutions and find something more natural.

However, it should be noted that there is one other medical procedure, the Pillar procedure, that is significantly less invasive. This is performed by a dentist and involves tiny polyester implants in the soft palate of an apnea (or snoring) sufferer.  It is actually the vibration of the soft palate that can lead to snoring and often apnea, so this can be an easy fix in some cases since it is done with minimal anesthetics.

WARNING:  It is critical to get your apnea treated.  One study looked at 380 participants with moderate or severe sleep apnea over a 14-year period and found that one-third of the patients died! [9] That's in comparison to 8 percent without apnea.

Those suffering from apnea or other sleep disorders should definitely consider green tea, as they get their condition under control. The oxidative stress from apnea typically affects memory and the ability to learn. Researchers have found that green tea, at least in animals, protects the brain from oxygen-deprived states that occur in apnea and related disorders. Green tea for the rats in this study actually protected their brains and memory from the ravages of apnea sleep loss. [4]

Below is a summary of additional natural solutions that researchers have found for apnea:

As you can see, reversing sleep apnea can not only extend your life span but also its quality.  Giving your body the oxygen it needs will change your life!

7) SLEEP AND BREATHING, 5(4):167-172, "Higher Prevalence of Smoking in Patients Diagnosed as Having Obstructive Sleep Apnea"