Gynecomastia: How to Diagnose and Treat it 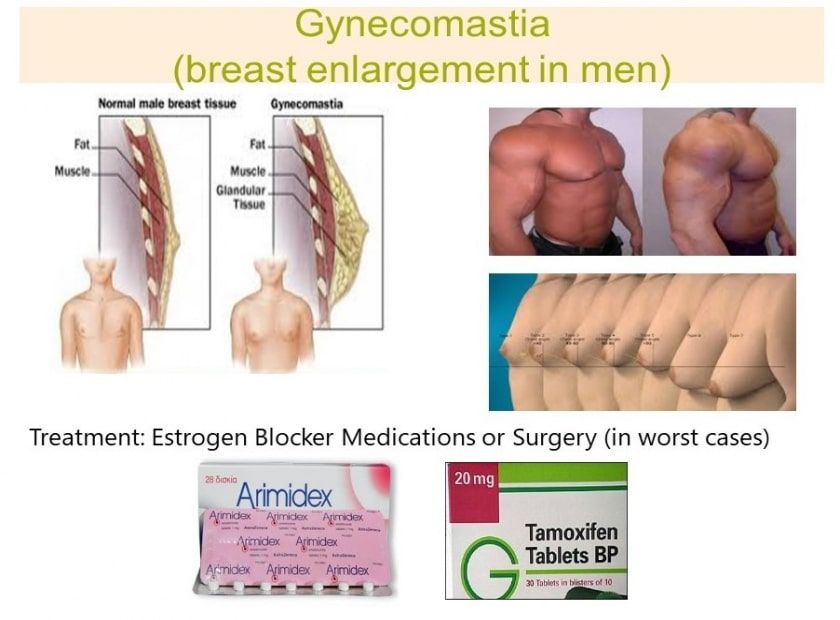 What is Gynecomastia and How to Diagnose it

Gynecomastia is a benign enlargement of the male breast resulting from a growth of the glandular tissue of the breast. It is defined clinically by the presence of a rubbery or firm mass extending concentrically from the nipples. At least 30% of males will be affected during their life. Since it causes anxiety, psychosocial discomfort and fear of breast cancer, early diagnostic evaluation is important, and patients usually seek medical attention.

Evaluation of gynecomastia must include a detailed medical history, clinical examination, specific blood tests, imaging, and tissue sampling. Individual treatment requirements can range from simple reassurance to medical treatment or even surgery.

Men who start experiencing this problem complain of pain and tenderness around the nipple area. Gynecomastia was reported to cause an imbalance between estrogen and androgen action or an increased estrogen to androgen ratio, due to increased estrogen production, decreased androgen production or both. Androgens include testosterone and DHT. High estradiol in the presence of low testosterone and DHT, growth hormone (IGF-1 is a metabolite), and a genetic predisposition to gynecomastia can increase the size of breast tissue in men.

Physiological gynecomastia is common in pubertal boys and appears to be associated with increased levels of insulin-like growth factor-1 (IGF-1) and pubertal growth, but not with a shift in the balance between estrogen and testosterone, a new study suggests. Study authors noted that IGF-1 together with estrogen is essential for the growth of breast tissue, and it appears that the effect of growth hormone on breast growth is mediated through IGF-1. "The stimulatory effect of IGF-1 on breast formation was synergized by estradiol, which was also elevated in boys with gynecomastia in our study. However, serum testosterone was similarly elevated, leaving the estradiol/testosterone ratio unaltered."

Testosterone converts into estradiol, DHT, and other metabolites. Men with higher amounts of the enzyme aromatase usually have this problem even at lower doses of testosterone. The growth of this glandular tissue is also influenced by a higher fat percentage, older age, excessive alcohol intake, and the use of certain medications. Gynecomastia rarely occurs in men using testosterone replacement since testosterone to estradiol ratios are improved.

In several studies on testosterone replacement, only a very small percentage of people receiving testosterone experience growth of breast tissue. In one HIV-specific study conducted by Dr. Judith Rabkin in New York, she reported that out of 150 men enrolled in the study, two men experienced this adverse reaction.

Dihydrotestosterone (DHT) is a natural metabolite of testosterone that has antiestrogen activity and cannot be converted into estradiol at the tissue level. Systemic or locally administered DHT has been successfully prescribed for the treatment of patients with idiopathic and estrogen-induced gynecomastia.

Gynecomastia is also seen in men with androgen resistance with low testosterone and DHT, where unfettered estrogen can stimulate subsequent breast development. However, in men with normal androgen receptor activity, estradiol is unable to stimulate breast development. This is thought to be due to an imbalance between the inhibitory and stimulatory effect of these hormones.

Medications and Products That Can Cause Gynecomastia

Some medications have been reported in the medical literature to cause gynecomastia due to decreases in testosterone, increases in estradiol, or both. These include:

If the gynecomastia is drug-induced, decreased tenderness and softening of the glandular tissue will usually be apparent within one month after discontinuation of the drug. However, if the gynecomastia has been present for more than one year, it is unlikely to regress substantially, either spontaneously or with medical therapy, because of the presence of fibrosis. In such circumstances, surgical subcutaneous mastectomy, ultrasound-assisted liposuction, and suction-assisted lipectomy are the best options for cosmetic improvement, as described in several case series.

During the rapid, proliferative phase, manifested clinically as breast pain and tenderness, medical therapy may be attempted. Most studies of drugs -- including testosterone (in patients without hypogonadism), have been uncontrolled and thus difficult to interpret because gynecomastia may resolve spontaneously. The few randomized, double-blind, placebo-controlled trials generally have been limited by small samples.

How do you manage gynecomastia if it does occur?

Although not approved for the treatment of gynecomastia, the selective estrogen-receptor modulator tamoxifen, administered orally at a dose of 20 mg daily for up to 3 months, has been shown to be effective in randomized and nonrandomized trials, resulting in partial regression of gynecomastia in approximately 80% of patients and complete regression in about 60%. Patients in whom tamoxifen is effective usually experience a decrease in pain and tenderness within one month. In a retrospective analysis of a series of patients with idiopathic gynecomastia, 78% of patients treated with tamoxifen had complete resolution of gynecomastia, as compared with only 40% of patients receiving danazol. In case series describing the use of tamoxifen for this condition in more than 225 patients, adverse events were uncommon but can include body aches, low sex drive, and fatigue.

The aromatase inhibitor anastrozole was not shown to be more effective than placebo in a randomized, double-blind, placebo-controlled trial in boys with pubertal gynecomastia. Although in an uncontrolled study of 10 patients with pubertal gynecomastia, the selective estrogen-receptor modulator raloxifene was shown to result in more than a 50% decrease in the size of the gynecomastia in the majority of the boys, there are insufficient data to recommend its use at this time.

Lowering the testosterone dose had not proven helpful for the two patients in Dr. Rabkin's study. The use of antiestrogens, such as tamoxifen 10 mg twice daily, with lower doses of testosterone have been effective. Some physicians prescribe low dose aromatase inhibitors for men with early-onset gynecomastia. Gynecomastia can become permanent if the condition lasts very long although it may reduce in size when the androgen use is discontinued. In the absence of resolution, surgical correction may be necessary in severe cases.

For men who experience enlarged breast size, doctors usually check estradiol levels to determine whether too much testosterone is being converted into estrogen. However, physicians usually forget that other hormone metabolites like DHT and IGF-1 may be involved in the development of gynecomastia, so they do not include these tests in the diagnostics panel.

Warning: Bringing estrogen down to very low levels could cause health problems in men in the long run. Hair/skin quality and health, brain function, bone density, lipids, sexual function, and other important factors may be greatly influenced by estrogen.

More information about estradiol and gynecomastia.