Effect of Estradiol on Men's Libido 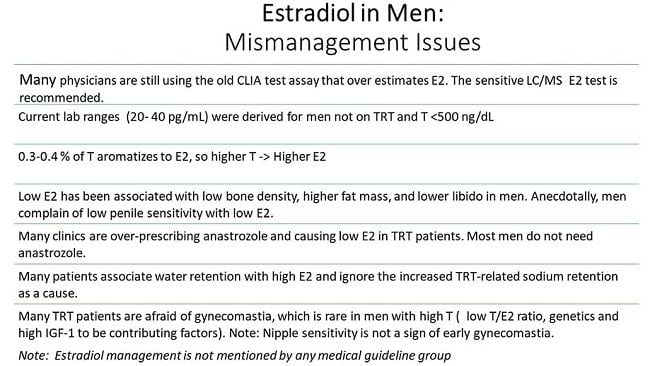 Historically, when we think of sex hormones in men and women, we identify testosterone as the core regulator of orderly male growth and sexual function. In a similar fashion, we identify estrogens central to regulating sexual and reproductive function along with a host of non-reproductive functions in women. 17ß-Estradiol or E2, the principal form of estrogen, is also produced in significant quantities in males.

Research over the last two decades has demonstrated that estrogens can play a pivotal role in regulating male sex drive, erectile function, spermatogenesis, and can also be responsible for body fat distribution, bone density, and overall morbidity and mortality. High estradiol, however, is known to cause breast tissue growth (gynecomastia) and water retention in men with low testosterone. Because of this dynamic, regulation of the balance of testosterone and estradiol in men is paramount. Although there is evidence to suggest that lower levels of estradiol (10-20 pg/ml) can increase bone loss, the impact of high levels of estrogen on male reproductive function and other morbid conditions is complex, and it is difficult to discern upper values for the optimal range where deleterious effects begin to occur. The impact of both estrogen deficiency and excess remains controversial. We present here a background of estradiol in men along with studies that highlight the importance of estrogen in male physiology.

As early as the 1930s, it was known that the male testis was responsive to estrogen and that exposure to high doses of estrogens causes developmental abnormalities. It was also speculated that the source of estrogen in males was the conversion from testosterone, which at the time was still considered the main “male hormone.” It wasn’t until the 1950s that conversion of testosterone to estrogen became well-documented. In the following decades, it became well-established that males produced significant quantities of estrogens and males of multiple species had quantifiable amounts of circulating estradiol that was synthesized in reproductive and non-reproductive tissues. In females, ovaries are the main source of circulating estrogens and regulate many facets of the female reproductive system. In males, it has been shown that the testes only produce approximately 20% of circulating estrogens, with the remainder being produced in tissues such as adipose, brain, bone, and skin, which convert testosterone to estrogens through the aromatase cytochrome P450. The diffuse pattern of estrogen production in men meant that there was no simple means to produce an estrogen-deficient state in the male comparable to an ovariectomized female. Thus, the role of estradiol and estrogen signaling in the normal male remained elusive due to a shortage of clear endpoints for estrogen action, as well as a lack of a good experimental model to approach the problem.

One significant advancement in the field came in the 1970s when it was demonstrated that the testes were the major source of estrogens in men. Biochemical analysis on aromatization of androgens to estrogens and protein labeling studies for localization of estrogen receptors (ER) and the conversion enzyme aromatase in the testis were utilized to further characterize the system. New developments in the ‘80s and ‘90s led to the hypothesis that estrogen and its α-receptor were “essential” for normal fertility. Because of this, the interest in the implications of estrogen signaling in the male reproductive system increased toward the end of the century. Work over the last two decades in genetically modified mouse models, and the discovery of natural mutations in men helped to make major advances in the investigation of estrogen physiology in men. Studies further revealed that estrogens are critical for normal development and function of male reproductive and nonreproductive organs.

Sex Steroids and the Male Libido

As mentioned earlier, testosterone has long been identified as the dominant sex hormone in men, and we now know that estradiol, previously thought to be only a female hormone, also plays a critical role in modulating libido, erectile function, and spermatogenesis. The extent of this role, however, is unclear and remains the subject of debate. There is an abundance of estrogen receptors, as well as aromatase in organs important to sexual function such as the brain, penis, and testis. Estradiol, therefore, can affect libido at multiple stages. Studies have indicated that decreased testosterone is associated with low libido in males. In these men, administration of exogenous estradiol can improve libido.

It is known that higher testosterone levels in men can prompt higher estradiol levels through conversion of androgens like testosterone to estradiol. In male hypogonadism, a condition in which the body does not produce enough testosterone, testosterone replacement (or supplementation) therapy can improve quality of life. Testosterone therapy is prescribed for millions of men and the numbers are increasing yearly. Currently, testosterone therapy is more often used in patients with non-specific symptoms, such as sexual function and fatigue, when lab levels of testosterone fall below a certain criterion (2 standard deviations below the mean value for health young adults). Although the measure is helpful, it fails to address the physiological changes at certain testosterone levels or potential role of the associated decline in estrogens that may occur in androgen deficiency.

Effect of Testosterone and Estradiol on Men's Libido:

In an innovative study to address these concerns, one group recruited healthy males to determine the point at which undesirable changes begin to occur with testosterone deficiency, estrogen deficiency or both and whether these changes were androgen-dependent, estrogen-dependent or a combination of the two.(Finkelstein et al. 2013) 2 groups of males (20 to 50 years of age) with normal testosterone levels were given goserelin acetate (to suppress endogenous testosterone and estradiol) and randomly assigned them to receive varying amounts of 1% testosterone gel (0g, 1.25g, 2.5g, 5g, or 10g) for 16 weeks. One group also received an aromatase inhibitor to suppress the conversion of testosterone to estradiol. Over the 16-week period, changes in body fat percentage, lean mass, subcutaneous- and intraabdominal-fat areas, thigh-muscle area and strength, and sexual function were assessed. The findings of this study indicate that when estradiol production was intact, fat accumulation began with mild testosterone deficiency (about 300 to 350 ng per deciliter). Lean mass, thigh-muscle area, and muscle strength, however, were maintained until testosterone levels dropped below 200 ng per deciliter. Sexual desire and erectile function exhibited different patterns in response to changes in serum testosterone reduction. While changes in lean mass, thigh-muscle area, and leg-press strength were associated with variations in testosterone levels, changes in fat measures were associated with changes in estradiol levels. Also, both androgens and estrogens were responsible for the maintenance of libido and erectile function.

This study provides important information regarding the interpretation of testosterone levels in young and middle-aged men. The authors indicate that the increases in intraabdominal fat with aromatase inhibition can foreshadow an increase in cardiovascular disease observed with long-term estrogen deficiency. Lastly, since lean mass, thigh-muscle area, and erectile function were reduced at a dose of testosterone that prompted a mean serum level of approximately 200 ng per deciliter (1.25g per day).

In the past, there has been some concern with possible side effects of elevated estrogen levels (hyperestrogenism), such as fatigue, gynecomastia, diminished libido, and erectile dysfunction. A large retrospective study conducted at 35 Low T Centers sought to understand if there were predictive factors of patients who were more likely to develop high estradiol levels after testosterone replacement therapy. (Tan, Cook, and Reilly 2015) As part of the study, the researchers also incorporated the use of aromatase inhibitor (AI) such as anastrozole (Arimidex) and selective estrogen receptor modulators (SERM) such as tamoxifen (Nolvadex) to alleviate symptoms of hyperestrogenism.

The trend in estradiol levels in the 4 age groups studied (<25, 25 to 44, 45 to 65, and >65 years) was analyzed. Estradiol was lowest in the <25 years age-group with a rise in the 2 middle age groups the gradually tapered in the oldest age group (>65 years). Much of the use of aromatase inhibitors was in the 2 middle age groups, resembling the prevalence of hyperestrogenism. Interestingly, it was determined that patients with lower estradiol (<42.6 pg/ml) had complaints of low libido. The authors also make note that despite the use of AI and SERM in 30% of the treatment population, side effects occurred in <1%.

One additional study worth mentioning sought to determine the associations between serum testosterone, estradiol, and libido in men undergoing testosterone supplementation therapy for symptomatic hypogonadism (total testosterone <300 ng/dl and 3 or more symptoms on the Androgen Decline in Aging Male questionnaire [ADAM]). (Ramasamy et al. 2014) As part of the ADAM questionnaire, all men were asked to rate their libido on a 5-point scale. Men were categorized into low (<300 ng/dl) or high (>300 ng/dl) testosterone and low (0.5-5.0 ng/dl) and high (>5.0 ng/dl) estradiol. Serum levels of follicle-stimulating hormone (FSH), luteinizing hormone (LH), serum testosterone, and sex hormone-binding globulin (SHBG) were analyzed to evaluate factors predicting libido.

Men with high serum testosterone and estradiol levels reported greater libido. In total, 60.4% of men with both high serum testosterone and estradiol levels reported a very good to excellent levels of libido on their questionnaire. When analyzing the combined data, only estradiol at serum levels >5 ng/dl was associated with a greater libido. The authors indicate several limitations of the study and despite the lack of proper controls, a small sample size, and absence of score comparison before and after initiation of therapy, the study emphasizes the importance of estradiol in men on testosterone.

Another recent study showed that change in estradiol level was the best predictor not only of the change in bone mineral density (BMD) and sexual desire.

In a review of the clinical implications of estrogens for sexual function and testosterone replacement therapy, one group notes that estrogens may contribute to the persistence of sexually stimulated erectile function when serum testosterone is severely depressed. Naturally occurring elevations in estradiol do not appear to be harmful, and the incidence of symptoms of excess estrogens are rare. They also add that the use of aromatase inhibitors is not recommended for long-term use and recommend against the use of aromatase inhibitors in men that experience positive effects from testosterone therapy despite elevated estradiol concentrations. When used, an aromatase inhibitor should be titrated so that estradiol levels remain above 40 pmol/L to preserve bone health.

It is important to mention that levels of circulating sex hormones are highly regulated via feedback loop of the hypothalamic-pituitary-gonadal (HPG) axis and on a tissue level with aromatase activity. As levels change, the body compensates. Caution should be taken when testosterone is used pharmacologically. It is difficult to compare the response from patient to patient because of many contributing factors and levels of testosterone alone may not give a clear picture of an individual’s disposition.