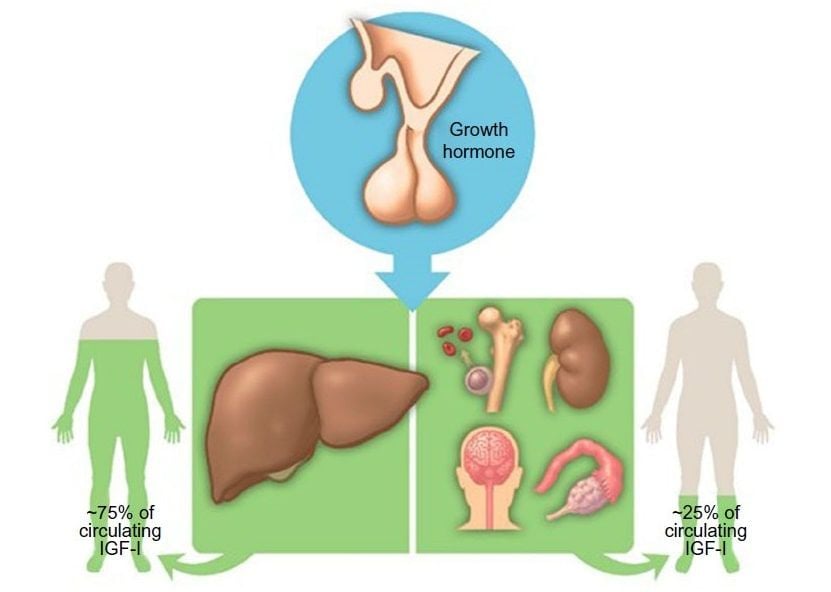 IGF-1, or Insulin Growth Factor 1, 1s a hormone in our body that is structurally very similar to insulin. It has a vital role in growth during childhood and adulthood and continues to have anabolic effects. IGF-1 is the primary mediator of the effects of growth hormone, which, most of us know, can benefit the male physique drastically and also has anti-aging effects.

IGF-1 is a hormone in our body that is structurally very similar to insulin. It has a vital role in growth during childhood and adulthood and continues to have anabolic effects. IGF-1 is the primary mediator of the effects of growth hormone, which, most of us know, can benefit the male physique drastically and also has anti-aging effects.

IGF-1 In Relation to Growth Hormone

As stated previously, IGF-1 is the primary mediator of GH secretion. So what exactly does that mean? It all starts in an area of the brain called the hypothalamus. Whenever GH needs to be secreted (GH levels are typically highest during periods of fasting and sleep), the hypothalamus releases growth hormone-releasing hormone (GHRH). This GHRH then binds to receptors in another area of the brain called the anterior pituitary. The anterior pituitary then releases GH into the bloodstream. GH has several effects on the body, including a glucose-sparing effect- meaning that instead of the body utilizing glucose as a primary energy source, the body taps into adipose tissue, using stored fat as energy. In this regard, GH can significantly HELP BURN FAT. However, this is not the only favorable action of GH. GH also has several anabolic growth effects. It increases the uptake of amino acids from the blood and increases protein synthesis in skeletal muscle tissue. This anabolism, however, can become problematic because GH ALSO targets bone cells and just about every other cell in the body. Excessive GH use can lead to a condition called acromegaly, which is characterized by uncontrolled bone growth. The most noticeable feature of someone with acromegaly or HGH abuse is the development of a jagged/uncharacteristically prominent jawline. 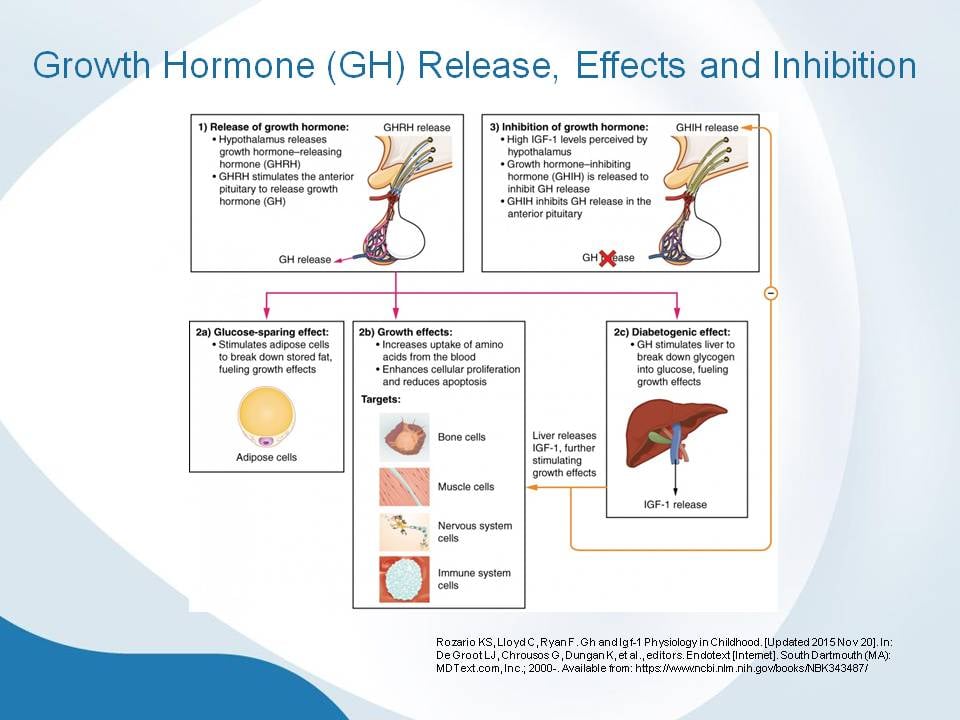 Where does IGF-1 come into play?

GH acts directly on the liver to produce IGF-1.

This IGF-1 is then released into the bloodstream to stimulate the growth effects of GH further. These two hormones work synergistically to promote cellular growth effects to the bone cells, muscle cells, nervous system cells, immune cells, and just about every cell in our body. GH also has a “diabetogenic effect,” meaning that when GH binds to receptors in the liver, the liver is instructed to break down glycogen into glucose, which fuels growth effects.

Other benefits and effects of IGF-1

Also linked to a lower likelihood of frailty status worsening were higher baseline levels of the hormone dehydroepiandrosterone sulfate (DHEA-S), but only in the oldest men. Several potential pathways could link DHEA-S with frailty. Swiecicka said, "DHEA-S may have direct anabolic effect on muscle, and, more recently, its neuroprotective and immune system-modulating effects have been described."

IGF-1 in Relation to Testosterone

In a study titled “Testosterone administration increases insulin-like growth factor-I levels in normal men.” Researchers discovered just that [4]. Although testosterone (T) administration can increase insulin-like growth factor-I (IGF-I) when administered to hypogonadal men, no studies have examined whether this occurs in normal men. The present study was undertaken to determine if an increase in IGF-I may be part of the anabolic effect of androgens. Researchers enrolled 11 normal men in a randomized, double-blinded cross-over study. Subjects were assigned to receive either T enanthate (TE) (300 mg im, each week) or nandrolone (ND) decanoate (300 mg im, each week) for 6 weeks. After a washout period, subjects were administered the alternate treatment. Pre- and post-treatment serum was analyzed for IGF-I by RIA after acid-ethanol extraction. Although GH levels were not significantly different after either TE or ND treatment, they tended to increase after TE treatment (1.23 +/- 0.28 ng/mL vs. 3.3 +/- 1.03 ng/mL) but remained unchanged after ND treatment (1.68 +/- 0.68 ng/mL vs. 1.89 +/- 0.64 ng/mL). Serum total T levels increased 32 +/- 0.05 nmol/L in the TE-treated men but fell by 7 +/- 0.02 nmol/L in the ND-treated men (P < 0.0001). These data indicate that when normal men are given TE, serum IGF-I levels increase after six weeks of treatment.