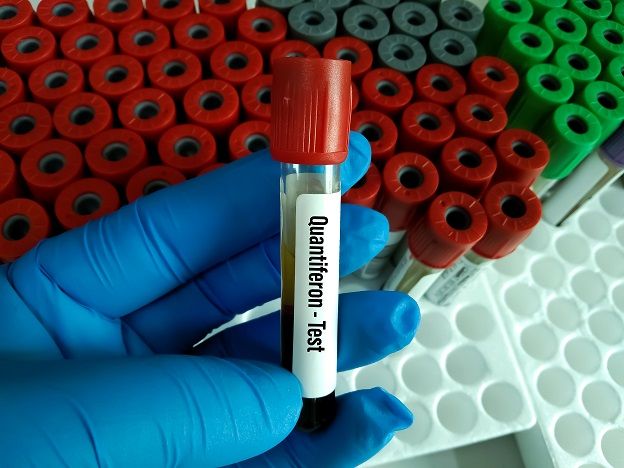 Tuberculosis (TB) is a highly contagious respiratory infection that, if left untreated, can spread to the spine and brain. Despite killing millions around the globe annually, TB is a treatable disease that is easily prevented. While in years past, the most common way to screen for TB was via a tuberculin skin test (TST); however, the process requires multiple doctor visits and proved unreliable. For these reasons, many colleges and organizations like the US Citizenship and Immigration Services have stopped accepting skin tests. Today, thanks to the Quantiferon-TB Gold Plus blood test, tuberculosis screenings are cost-effective, faster, and more accurate than antiquated TSTs.

Several tests can be used to diagnose tuberculosis (TB), including:

It's important to note that the choice of test depends on the patient’s symptoms, risk factors, and test availability. A healthcare professional can help determine the appropriate test or combination of tests based on the individual case.

Reducing The Spread of TB

While there is no guaranteed way to eliminate cases of TB completely, there are many precautions that can be taken to curb the spread of the disease. The first step that can be taken is to receive the BCG (Bacille Calmette-Guérin) vaccine. The dose is derived from a weakened strain of TB and has been used since the early 1920s. The vaccine is most effective in children, and while it is one of the most widely administered shots worldwide, it is not a catch-all panacea. Roughly 10 million cases of active TB flare up each year, demonstrating a clear need for more preventative measures. As TB is an airborne illness, some simple precautions that can be taken to minimize the risk of infection are:

While all of these factors can help mitigate the risk of contracting TB, the most effective way to halt transmission is by catching cases early. Most patients are unable to infect others two weeks after being diagnosed and starting on proper medication. So, while preventive measures are critical, the most imperative aspect of slowing the spread of TB is identifying existing cases so it is passed on to as few individuals as possible.

Should I Get a TB Test?

Tuberculosis can be challenging to diagnose because many infected individuals are asymptomatic. TB bacteria have the ability to remain dormant in a host body for years but only manifest symptoms once the virus becomes active. You should consider testing for TB if you experience any or all of the following symptoms:

While there are a variety of screening methods to detect a TB infection, including chest X-rays and testing mucus samples, the most accurate is the Quantiferon TB Gold Plus test. These other methods have proven to have limited accuracy and can return false positives. With just 4 ml of blood, the Quantiferon Gold test can detect tuberculosis with up to 94% sensitivity.

How Does TB Affect the Body?

Roughly 1.8 billion people are infected with tuberculosis; however, a vast majority of these cases are latent. The TB can remain idle for months, or even years, waiting for the immune system to weaken before becoming active. As such, people with weakened immune systems are more likely to develop active TB within weeks or days of initial exposure. Their bodies are simply unable to fight off the infection as the bacteria multiply, most commonly attacking the lungs. In more serious cases, traveling through the blood or lymphatic system, the infection can attack the bones, organs, and/or skin.

Who Is Most at Risk to Develop TB?

There are a variety of factors that go into determining the risk for TB. Rates of tuberculosis infection are typically higher in poorer countries, but cases can be found all across the globe. Fundamentally, TB manifests in locations that lack proper hygiene resources and/or overcrowded areas where transmission is much easier. This makes crowded living spaces such as college dormitories or homeless shelters hot spots for infection. Countries with large populations, such as India and China, typically see the highest rates of active TB each year. Other factors that increase one's risk of contraction are regular consumption of drugs and alcohol, pre-existing illnesses that weaken vital organs and the immune system or even taking certain medications designed to treat other diseases. While TB is contagious, it is not as easily contracted as other airborne illnesses. You are highly unlikely to contract TB from passing someone on the street; most cases come from prolonged exposure to a family member or co-worker. Groups that are more at risk of developing active TB are babies, the elderly, and individuals with autoimmune disorders such as HIV or diabetes. If you or a loved one is at risk and experiencing symptoms such as persistent cough, chest pains, or coughing blood, we strongly recommend taking a tuberculosis blood test. This could not only save the life of an infected individual, but someone they might pass the infection on to.

How Is TB Treated?

Those with Latent TB should still seek preventative treatment from a medical professional, as their case could become more serious down the line, despite not initially being contagious. The most common remedy is to start on antibiotics that root out the infection before it can develop into an active case. Treating an active case of tuberculosis can be slightly more complicated for a multitude of reasons. The first is that it can take anywhere between six and twelve months for the medication to completely irradiate the infection. Patients may feel they've recovered after a few weeks of treatment, but it is imperative they stay on the proper medications for the duration of time their doctor specifies. Stopping before finishing the cycle of medications could lead to reinfection, lowered resilience to the disease, and even drug-resistant strains of TB. These strains are the most dangerous as they evolve to nullify the effects of medication used to cure the disease. Recovery after developing a drug-resistant strain of TB can take much longer, between 20 and 30 months, not to mention the patient is more likely to experience multiple side effects. While TB is widespread and can come with a fair share of complications, it is completely preventable and relatively easy to manage with proper medical oversight. Through modern and accurate tests such as Quantiferon- TB Gold Plus, we are able to catch tuberculosis before it can cause irreparable harm. In doing so, not only can we keep ourselves healthy but limit the spread of this disease in our communities and across the globe.

BUY A CHEAP TB TEST NEAR YOU