Blood Versus Saliva Hormone Testing: Which One Is More Accurate? 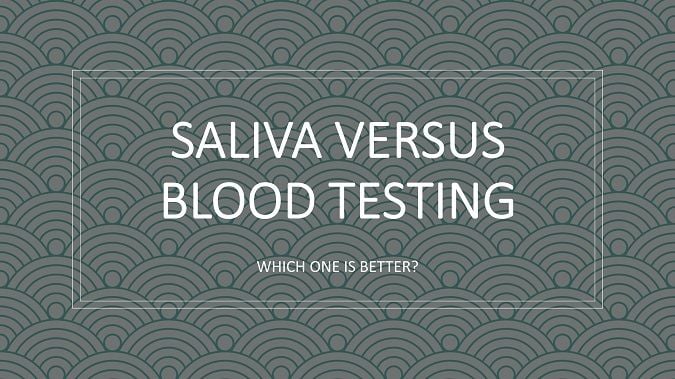 Thanks to the advancements in medicine and laboratory equipment, it's now possible to use various human samples to obtain precise information about a patient's health. Moreover, various testing methods and techniques are highly accurate, helping doctors come up with the right diagnosis for each patient.

For example, blood, urine, and saliva hormone testing are commonly used as samples to detect diseases, vitamin deficiencies, hormone levels, and so on. Doctors might also use a small tissue sample to detect cancer in certain patients (biopsy), but this is a subject for another article.

Now we'll focus on the difference between saliva and blood hormone testing. Keep reading to find out more about it and which one is more suitable for certain types of health tests.

Believe it or not, human saliva contains a lot of hormones and substances that can help doctors come up with an accurate diagnosis. Saliva testing usually involves putting a swab into the mouth of the patient and letting it there until it becomes saturated.

It's also possible to draw a saliva sample using specially designed tubes. The patient orders the plastic tubes as a sample kit for home collection and spits into the tubes at various moments of the day. This is usually done for cortisol measurement.

One of the biggest advantages of saliva testing consists of its convenience. It's easier for patients to offer a saliva sample than to hold up an arm for blood drawing. Saliva testing is most preferred by people who are afraid of needles.

At the same time, a lot of information about your hormones and general health can be taken from saliva. For example, saliva testing is used for cortisol (the stress hormone) produced by your adrenal glands, estriol, and several other hormones.

Another advantage of saliva testing is that it can be done at home using special collection kits as mentioned above. Patients can also monitor certain hormones such as cortisol better because they can offer a saliva sample at various moments of the day. This helps doctors create a chart with the highs and lows of a specific hormone or substance.

As a result, saliva testing might be highly inaccurate for testing certain hormones including testosterone and estrogen. Blood testing using the LC/MS assay technique described below for these hormones is recommended for men and women who want to keep track of their sex hormones.

Additionally, various lifestyle factors can affect the results of saliva testing. For example, your diet and even how aggressively you brushed your teeth can alter the hormone levels in your saliva. This will render an inaccurate diagnosis for various hormone tests.

Blood testing is also known as serum testing and it's one of the most popular and efficient testing methods out there. It's a tried and tested method used for decades to assess the health and wellbeing of a patient.

Multiple hormones including testosterone and estrogen can be tested using a blood sample. Patients typically draw blood at a nearby clinic and they receive the results after a few business days or even quicker.

Blood testing is highly accurate and it works for nearly all types of tests out there. It can be used to accurately measure PSA levels in men as well as monitoring hormones in people undergoing hormonal therapy.

However, blood testing also has minor disadvantages. For example, this testing method provides a single snapshot of your hormones and/or general health. You cannot draw blood multiple types a day and have it measured in a lab. Blood samples are drawn several times per year at most.

That's why blood testing might be done in a combination with other testing methods such as saliva and urine testing for certain hormones or substances such as estriol. This helps doctors come up with a more accurate diagnosis because they have a larger data pool from which to interpret the results.

A Word About LC-MS Testing

When it comes to analyzing a blood sample, a lot of improvements have been made in the last decades. Some of the most advanced testing methods involve liquid chromatography-mass spectrometry testing and this technique provides highly accurate results.

LC-MS testing is often done to measure the total level of testosterone in your body. It can also be used for sex hormones such as estrogen, progesterone, and others. Without getting into too many technical details, this method uses highly advanced laboratory equipment to analyze ionized molecules of a particular sample or specimen. Unlike regular immunoassay-based tests used in saliva and common hormone blood test, LC/MS technology does not suffer from potential interactions from inflammatory markers like C-Reactive Protein (CRP) and supplements like biotin and others.

Laboratories usually design their own LC-MS assays which are complex chemical reactions that allow medical instruments to detect specific information in the blood sample. LC-MS is increasingly popular these days because it's highly flexible and very accurate.

When you order a direct-to-consumer blood test such as a total testosterone test, your blood sample is usually analyzed using LC-MS testing in a laboratory. Given the complexity of this procedure, now you probably understand why blood testing is more accurate than saliva testing for most hormonal tests.

As you can see, all testing methods have their pros and cons. That's why it's important to select the correct testing options for certain hormones and substances. As mentioned earlier, saliva hormone testing is best used for cortisol measurement. You can order your 4-tube saliva testing kit from Discountedlabs.com at an affordable price.

For most other hormone tests, blood testing is likely the most accurate and popular choice. You can test the levels of multiple hormones in your blood using individual tests or complex test panels. Check out this broad range of hormone tests on Discountedlabs.com. Most of these tests use LC-MS testing to deliver highly accurate results.