Estradiol in Men on TRT: Impact on Brain and Heart 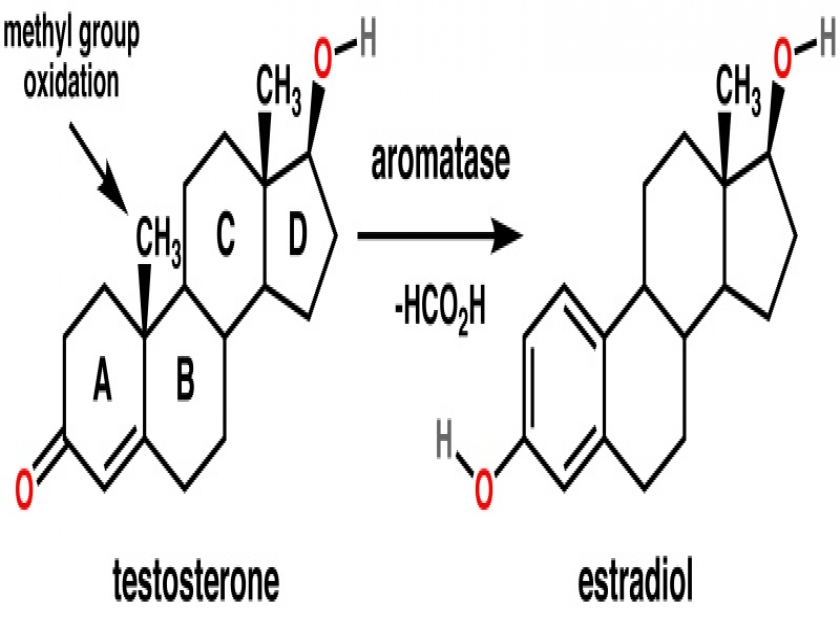 Estradiol is a form of the female hormone estrogen. Although estradiol production is typically considered a female concern, men also need to maintain healthy levels of this hormone for optimal health. Since men lack ovaries (where most estradiol is produced in women), estradiol in men is created by a process that uses an enzyme called aromatase (1) in testicles, liver and fat cells.

Aromatase converts a very small portion of testosterone levels into estradiol, and health problems can arise when aromatase levels are too high or too low (1).

When aromatase is unbalanced, estradiol becomes an issue

As men age, they can experience excess aromatase activity, raising estradiol levels and reducing testosterone to unhealthy levels. Low T levels will adversely impact quality of life by reducing libido, ability to maintain an erection, mood, and muscle mass, among other health factors (2).

However, when the body produces too little aromatase, men can experience other, potentially serious health problems.

Let’s look at recent studies finding that low estradiol can play a critical role in increasing the risk of cognitive decline and increase the odds of experiencing cardiovascular disease.

A study led by Elaine Yu, MD, MSc, addresses the suspicion held by many medical professionals that testosterone can promote cardiovascular disease in men, and that estradiol provides protection against it (4).

The researchers sought to determine whether it was estradiol or testosterone that regulated men’s cardiovascular risk factors by comparing two groups whose hormone levels were changed using a combination of medications (4).

They looked at 400 healthy men, between the ages of 20 and 50. Study participants were weighed, had fasting blood tests for markers of heart disease and diabetes, and also had a thigh scan using quantitative computed tomography (CT scan) to measure muscle fat content before and after the study (4).

Yu’s team found that while higher levels of testosterone reduced these men’s levels of healthy (HDL) cholesterol, changes in estradiol levels had no effect at all on HDL(4).

However, they also discovered that low estradiol levels did increase the markers for diabetes, like increased insulin resistance, increased fat in the muscles, and higher fasting blood sugar levels(4). Diabetes is a major risk factor for heart disease (5).

Additionally, the study found that neither estradiol nor testosterone affected the levels of LDL (unhealthy) cholesterol.

According to Yu, these findings indicate that in men, it’s higher testosterone levels combined with lower estradiol levels that can worsen cardiovascular risk factors, somewhat explaining differences in the incidence of heart disease between men and women. Some studies have shown that it is the ratio of testosterone to estradiol that is important, not just the level of each of those hormones. As testosterone increases with TRT, so does estradiol to balance the effects of testosterone on lipids, mood and insulin action.

ADT is typically prescribed on an open-ended (no fixed period) basis to help treat advanced prostate cancer. An estimated 44 percent of men with prostate cancer will undergo ADT at some point as part of a strategy to slow tumor growth (6).

ADT therapy is used specifically to block the male hormones, particularly testosterone, from stimulating prostate cancer cell growth. Research has confirmed that ADT can cause significant cognitive decline in women with breast cancer (8), but few studies have investigated cognitive impairment following ADT for men being treated for prostate cancer.

Using formal tests, scientists recently compared the cognitive ability of 58 prostate cancer patients receiving androgen deprivation therapy to 84 prostate cancer patients who did not receive ADT, and 88 cancer-free men (9). They found that those treated with ADT were 70 percent more likely to develop cognitive impairment after six months, and over twice as likely to have significant cognitive impairment after one year(9).

A review of the literature found that while some studies show that estradiol supplementation resulted in cognitive improvement (especially in spatial ability), They couldn’t determine (9):

They conclude that for androgen-deprived males, there is some evidence that estradiol supplementation may improve both verbal and visual memory (9). However the variability between the reviewed studies resulted in significant inconsistencies, making further study necessary to determine what estradiol treatment protocol can best maximize cognitive improvement for men using ADT (9).

Should high estradiol levels be treated?

Men on testosterone replacement therapy can experience an increase in estradiol that can sometimes reach clinically elevated levels (10).

Researchers comprehensively reviewed the published literature on the role of estradiols in male sexual function and testosterone deficiency to answer this question.

The study findings reveal that (11):

Given the evidence uncovered by this review study, researchers report that, although further research is needed, the existing evidence doesn’t support the treatment of elevated estradiol for men on testosterone therapy (11).

WATCH LECTURE ABOUT ESTRADIOL IN MEN BY CLICKING HERE