High Estradiol Blood Level in Men: How High is Too High? 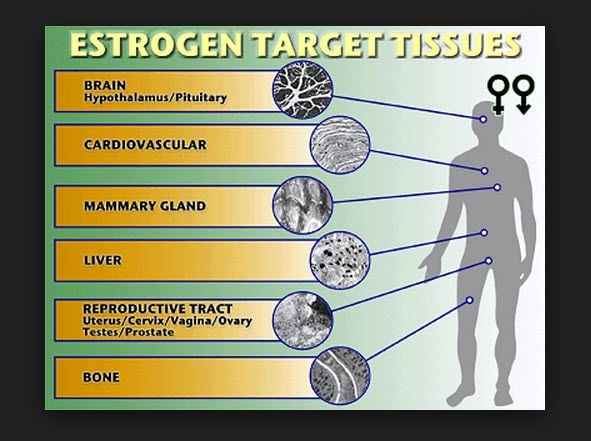 What is High Estradiol?: Predicted Blood Levels in Young and Older Men on TRT

This is a Video Transcript:

Testosterone is the precursor hormone for estradiol. Estradiol is a hormone more abundant in women than men that are produced by the aromatization of testosterone in the liver, fat, and other cells. Nature created it for a reason. It is responsible for healthy bone density and cholesterol, but its role in men's sex drive, body composition, and other variables is a source of great debate.

Many anti-aging or men's health clinics prescribe aromatase inhibitors (AIs) to men who start testosterone replacement (TRT). Higher estradiol blood levels in the presence of low testosterone can cause breast tissue growth in some men and possibly other issues. Some people speculate that high estradiol can also lead to erectile dysfunction, but no scientific papers have been published on this subject. Since higher testosterone blood levels can originate in higher estradiol levels, the belief is that using an AI will prevent breast tissue growth and erectile dysfunction by lowering any potential increase in estradiol. However, we have no data on how high is too high when it comes to this hormone in men using testosterone therapy. Emerging data show that low testosterone-to-estradiol ratios may correlate more closely to infertility, gynecomastia, and erectile problems than high estradiol levels alone.

The truth about these speculations is starting to emerge, but we still need more data to say what the upper value of the optimal range of estradiol is. We have a lot of evidence about the lower side of the optimal range since it has been found that estradiol blood levels below 10-20 pg/ml can increase bone loss in men. A recently published study also nicely demonstrated that low estradiol could be associated with higher fat mass and lower sexual function in men. So, be careful when a clinic wants to put you on this drug without first justifying its use.

This study’s findings were published in the Journal of Clinical Endocrinology and Metabolism in 2010.  The fantastic thing is that nobody has reviewed it, even though it's probably the most important paper on what happens to estradiol and DHT in men on TRT. The study enrolled 51 young men 19 to 35 years of age and 52 older men 59 to 75. These men were given a gonadotropin-releasing hormone agonist to shut down their gonadotropins, LH and FHS, testosterone, estradiol, and DHT.

So, these were courageous volunteers that were willing to have their hormones wholly shut down. So, why did they do this? They did it because the researcher wanted to start from zero regarding hormones. So, those men were given injections of different doses of testosterone enanthate 25, 50, 125, 300 up to 600 milligrams a week for five months. And the researchers measured the testosterone, estradiol, and DHT blood levels. Unfortunately, they used the old test estradiol test based on immunoassay. This estradiol test may not be as accurate as the new test we're using now, the ultra-sensitive estradiol test with no interference from CRP and inflammatory markers. Usually, the sensitive estradiol is 20% lower than estradiol levels measured by the old test.

Let's assume that most of these men did not have inflammation. Here are their baseline characteristics. Interestingly, they were even exposed to such high doses of testosterone. So, after a four-week controlled period, they were given leuprolide depo, the gonadotropin-releasing hormone agonist that shuts down gonadotropins. This drug is used for prostate cancer. They were randomized to receive weekly injections of testosterone enanthate for 20 weeks. The researchers found an issue with the higher testosterone dose in older men with a few more side effects. They stopped a few men from continuing with the 600 milligrams of testosterone weekly. And the randomization was limited after that to 25, 50, 125, and 300 milligrams weekly.

I've warned people not to use high testosterone doses, especially older people with comorbidities and heart problems. Or even not so much heart problems, blood pressure, or tachycardia which are usually the main side effects as listed in the study paper. Anyways, not going to go through the different discussions here.

So, what you see here are serum estradiol E2: T ratios. We talk about ratios on ExcelMale.com. I usually talk about T divided by E2 (T/E2 ratio); here are the opposite DHT and T ratios.  And the black bars are younger men and the white bars are older men. So, this is total estradiol, free estradiol, total DHT, and free DHT. And when we talk about free, what does that mean? It is the unbound estradiol and unbound DHT that isn’t bound by sex hormone-binding globulin.

Why Are Men on TRT Concerned About High Estradiol?

Most men on TRT initially fear high estradiol since they fear it causes water retention and gynecomastia. They feel puffy; they may have more sensitive nipples. I will discuss this in another video because those symptoms are usually not connected to high estradiol per se when men have moderate to high testosterone levels. Edema, the holding of a water weight problem, is usually caused by the slowdown of sodium metabolism in the kidneys caused by testosterone and androgens. Sodium (salt) retention happens in the first few weeks, especially with higher TRT doses in older men. The sensitive nipple issue usually does not lead to gynecomastia and may be caused by the stimulation effects of testosterone.

So, as you can tell, that total E2, free E estradiol, and DHT increase with increasing testosterone dose, and this increase is much more pronounced in older men. It’s good to mention that these volunteers were not fat men. The increased fat mass has been linked to increased estradiol levels. These are men with a BMI of around 26, which is not a high number. But anyways, so we do see an increase. And older men, in white, tend to have a higher estradiol increase. DHT is the same thing. Although the differences were not as noted between young and old, you can tell here the free DHT. When you divide estradiol into testosterone, and that's when you see decreases. Estradiol increases to a higher degree than testosterone, so the ratio of E2 divided by T decreases. The total DHT to T ratio is the same; it decreases as we increase the testosterone dose, but not as fast as the estradiol.

It is essential to mention that 0.4% of testosterone is aromatized to estradiol. That's a very tiny amount, that's 0.4%. The conversion of testosterone to DHT by 5 alpha-reductase is around 10%. That's why you see the scales a little more prominent on the DHT side.

How Can This Study Help to Predict Normal Estradiol and DHT Test Levels?

Most men on TRT don't have to be so concerned about the LabCorp or the Quest estradiol ranges that usually scare people because they're always high.

The researchers in this study came up with a model with factors to predict the estradiol and DHT response curves. They provided two equations for young men (Estradiol and DHT) and two for older men.  Using those equations, you can roughly estimate the predicted estradiol and DHT levels for different testosterone blood levels.  These equations enable us to see what is considered a “normal” estradiol level instead of using estradiol lab ranges that are ill-fitted for men on TRT. As previously mentioned, the estradiol ranges of LabCorp and Quest were not derived from a dataset of men on TRT who usually have total testosterone blood levels over 600 ng/dL (many are having T levels of 1000 ng/dL or more!).

The Importance of Preserving Proper Estradiol Levels in Men

Estradiol has essential roles in men. Estradiol comes in to protect us from higher testosterone. It improves lipids, improves HDL, improves endothelial function. Women tend to live longer than men because they have had higher estradiol to protect them against the cardiovascular risks we are all exposed to. So, don't freak out when you see the 60s, even in the 70s, depending on how high your testosterone is. And the only problem we're having in this field is that we still need to do a study that goes after symptomology depending on estradiol blood levels when we control testosterone. We know that estradiol levels under 15 picograms per milliliter cause problems with bone density and even fat gain.  Many members of ExcelMale.com say that their penile sensitivity decreases when they have low estradiol.

Regarding high estradiol, we do not know what high value can cause issues in men on TRT with relatively high testosterone blood levels. If somebody is, let's say, at 1,275 ng/dL of testosterone and 64 pg/mL of estradiol, is there any consequence to that? We don't know. And the problem I'm seeing is that most of you guys are assuming too much; you're assuming that because you're holding water or you have sensitive nipples, you have high estradiol. And you start treating with an AI without even testing your blood levels of estradiol, especially using the sensitive assay. That concerns me because once you start treating with an AI, you can crash your estradiol. “Crashed estradiol” has become one of the most significant traffic source keywords for ExcelMale, because people are experiencing that more and more.

I hope you enjoyed the presentation. I've put together a free testosterone book (over 400 pages) that I use when I train physicians. Please remember to subscribe to the ExcelMale forum and the ExcelMale YouTube channel, and make sure that you click on that little bell that will tell you when I upload new videos. Thanks a lot and stay safe.